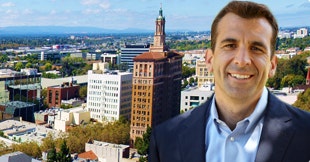 Protesters vandalized the home of San Jose’s mayor Friday in a demonstration against the Wisconsin police shooting of Jacob Blake.

They marched to the mayor’s home, then ran off after spraypainting the house. Mayor Sam Liccardo and a number of neighbors scrubbed the graffiti off later Friday.

Around 150 protesters marched near San Jose City Hall in a Black Lives Matter demonstration earlier in the day, calling to defund the San Jose Police, according to the San Jose Spotlight. By nightfall, a smaller group of 30 or 40 protesters had veered off to march toward Liccardo’s home.

As they approached the home, one man spraypainted “F— you” on the mayor’s front door.

Others began to spraypaint messages such as “BLM” and “San Jose will be free.” Liccardo’s window already had a “Black Lives Matter” sign on it before protesters arrived. The mayor was not home at the time.

Protesters also reportedly set fire on a sidewalk nearby, and Liccardo said they were burning a flag.

Liccardo on Saturday released a statement saying the graffiti does not represent the Black Lives Matter movement. He thanked his neighbors for helping him clean up.

“I’m tremendously heartened by the response of dozens of my neighbors who dropped everything late last night to spend a couple of hours scrubbing graffiti from Jessica’s and my home,” he said. “Many of these same neighbors’ homes bear “Black Lives Matter” signs, and they represent the true spirit of the movement, and of our San Jose community. They contrast sharply with the roughly hundred so-called ‘protesters’ who stood by silently — or even cheered — as a flag was burned and while ‘f*ck you’ and other messages were scrawled on our home.”

Blake, 29, was left paralyzed, his family said, after he was shot seven times in the back by police on Sunday, sparking a new round of racial injustice and police brutality protests that has beset the nation over the past few months.

Democratic Rep. Ro Khanna, who represents the San Jose area, condemned vandalism of the mayor’s house as “morally outrageous” in an interview with Fox News.

LORI LIGHFOOT DEFENDS BAN ON PROTESTERS ON HER BLOCK, CITING HER RIGHT TO SAFETY

He called on every elected official to speak out against violence, destruction and looting, which he said undermines the police reform cause.

“There is absolutely no justification for the vandalism that took place at the mayor’s personal residence. This is not the first instance.  His house, his property has been targeted in the past. ” Khanna said.

“We resolve issues of dispute through political means, through elections, through dialogue, through peaceful protest. We do not resort to violence and that applies equally to vigilantes. We’re not a nation that tolerates vigilante justice,” the congressman continued.