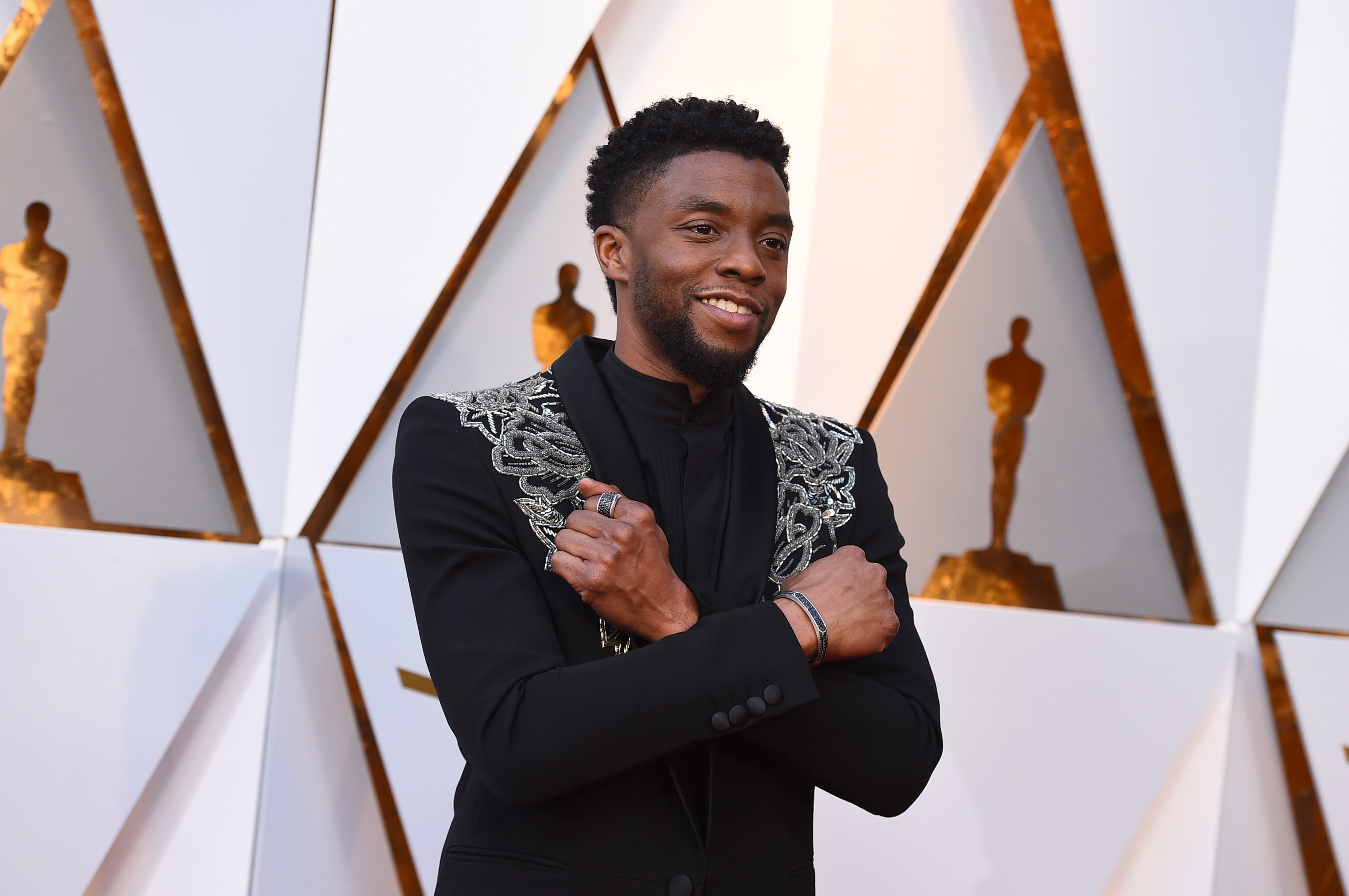 The world is mourning the loss of Chadwick Boseman, who passed away on Friday following a battle with colon cancer.

Boseman, 43, embodied legendary Black icons Jackie Robinson and James Brown on his way to becoming the face of the venerable Black Panther in the Marvel cinematic universe.

In this file photo, Chadwick Boseman arrives at the Oscars at the Dolby Theatre in Los Angeles in 2018. (Jordan Strauss/Invision)

As his star soared, the actor privately underwent “countless surgeries and chemotherapy” to fight cancer, his family said in a statement. Boseman had been diagnosed at stage 3 in 2016, but never spoke publicly about it.

He died at his home in the Los Angeles area with his wife and family at his side, his publicist told The Associated Press.

“Chadwick…..no words to express my devastation of losing you. Your talent, your spirit, your heart, your authenticity……..It was an honor working beside you, getting to know you….Rest well prince…May flights of angels sing thee to thy heavenly rest. I love you!” wrote Viola Davis, co-star in “Get on Up” and the upcoming adaptation of August Wilson’s “Ma Rainey’s Black Bottom.”

“This young man’s dedication was awe-inspiring, his smile contagious, his talent unreal. So I pay tribute to a beautiful spirit, a consummate artist, a soulful brother… All you possessed, Chadwick, you freely gave,” said Angela Bassett, “Black Panther” co-star. “Rest now, sweet prince.”

“I don’t have words. Rest In Peace, Bruh. Thank you for all you did while you were here,” tweeted “Black Panther” co-star Sterling K. Brown. “Thank you for being a friend. You are loved. You will be missed.”

“I’m absolutely devastated. This is beyond heartbreaking. Chadwick was special. A true original,” tweeted Chris Evans, who played Captain America in multiple Marvel films. “He was a deeply committed and constantly curious artist. He had so much amazing work still left to create. I’m endlessly grateful for our friendship. Rest in power, King.”

“What a man, and what an immense talent. Brother, you were one of the all time greats and your greatness was only beginning. Lord love ya. Rest in power, King,” echoed Mark Ruffalo, Boseman’s co-star in “Avengers: Infinity War” and “Avengers: Endgame.”

“THANK YOU @chadwickboseman for all you gave us. We needed it & will always cherish it!” wrote Samuel L. Jackson, co-star in “Avengers: Endgame.”

“A talented & giving artist & brother who will be sorely missed.”

“Gonna miss you mate. Absolutely heartbreaking. One of the kindest most genuine people I’ve met. Sending love and support to all the family xo RIP,” posted Chris Hemsworth, who played Thor.

“Rest in Power King T’Challa. My heart is so heavy right now,” wrote Zoe Saldana, who played Gamora, on Instagram. “Your passing has hit me hard. I will tell my sons about you forever. You were one of the classiest men I have ever met in my life. It was an honor to have shared minutes with you on screen.”

“Chadwick was someone who radiated power and peace,” said Brie Larson, who played Captain Marvel. “Who stood for so much more than himself. Who took the time to really see how you were doing and gave words of encouragement when you felt unsure. I’m honored to have the memories I have. The conversations, the laughter. My heart is with you and your family. You will be missed and never forgotten. Rest in power and peace my friend.”

“He was a gentle soul and a brilliant artist, who will stay with us for eternity through his iconic performances over his short yet illustrious career,” Denzel Washington said in a statement, per The Associated Press. “God bless Chadwick Boseman.”

“This is a crushing blow,” tweeted director and actor Jordan Peele.

“Our hearts are broken and our thoughts are with Chadwick Boseman’s family,” a spokesperson for Marvel Studios posted. “Your legacy will live on forever.”

“Heartbroken,” Harris wrote on Twitter. “My friend and fellow Bison Chadwick Boseman was brilliant, kind, learned, and humble. He left too early but his life made a difference. Sending my sincere condolences to his family.”

Harris and Boseman were both graduates of Howard University, and his final tweet celebrated her selection as Biden’s running mate.

“The true power of Chadwick Boseman was bigger than anything we saw on screen. From the Black Panther to Jackie Robinson, he inspired generations and showed them they can be anything they want — even super heroes,” tweeted Biden. “Jill and I are praying for his loved ones at this difficult time.”

Fox News’ Julius Young and The Associated Press contributed to this report.