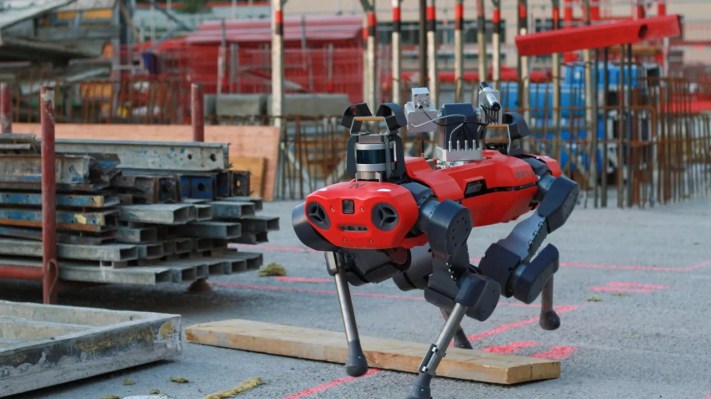 ANYbotics, the creators of ANYmal, a four-legged autonomous robot platform intended for a variety of industrial uses, has raised a $22.3M Swiss Franc (~$20M) round A to continue developing and scaling the business. With similar robots just beginning to break into the mainstream, the market seems ready to take off.

The company spun out of ETH Zurich in 2016, at which point the robot was already well into development. ANYmal is superficially similar to Spot, the familiar quadrupedal robot from Boston Dynamics, but the comparison mustn’t be taken too far. A four-legged robot is a natural form for navigating and interacting with environments build for humans.

ANYbotics is on the third generation of the robot, which has progressively integrated computing units and sensors of increasing sophistication.

“Our current ANYmal C model features three built-in high-end Intel i7 computers that power the robot and customer-applications such as automated inspection tasks,” explained co-founder and CEO Péter Fankhauser in an email to TechCrunch. “The availability of smaller and more performant sensors, propelled by AR/VR and autonomous driving applications, has enabled us to equip the latest ANYmal model with 360-degree situational awareness and long-range scanning capabilities. Where commercially available components are not satisfactory, we invest in our proprietary technologies, which have resulted in core components such as custom motors, docking stations, and inspection payload units.”

The most obvious application for robots like ANYmal is inspection of facilities that would normally involve a human. If a robot can traverse the same paths, climb stairs, open doors and so on, it can do so more frequently and regularly than its human counterparts, who tire and take breaks. It can also monitor and relay its surroundings in detail, using lidar and RGB cameras, among other tools. Humans can then perform the more difficult (and human) work of integrating that information and making decisions based on it. An ANYmal at a factory, power plant, or datacenter could save costs and shoe leather.

Of course, that’s no use if the bot is fragile; fortunately, that’s not the case.

“In terms of mobility, we have focused on what matters most to our industrial customers: Operational reliability and robustness to harsh environmental conditions,” Fankhauser said. “For example, we design and test ANYmal for day and night usage in indoor and outdoor locations, including offshore platforms with salty air and large temperature ranges. It’s less about agility in these environments but more about reliably and safely performing the tasks multiple times a day over many months without human intervention.”

Swisscom Ventures leads the round, and partner Alexander Schläpfer said that good roots (ETHZ is of course highly respected) and good results from early commercial partnerships more than justified their investment.

“Over ten years ago, some of our co-founders developed their first walking robots during their studies at ETH Zurich,” said Fankhauser. “Today, the industries are ready to adopt this technology, and we are deploying our robots to our early customers.”

Posthaste: Canada’s hottest housing markets are slowing — and condos are the Achilles heel

Oscar Issac will play Solid Snake in a…